Contact Recent Yale graduates from Class of 2016-2020, and current Yale students to discuss their post-graduate roles and summer employment experiences!

Are you wondering where Yalies go after graduation? Perhaps you want to see what kind of summer internships are realistic for a specific class year? Interested in searching by a specific major to see what industries and job functions are possible? How about looking up a specific employer to see if any Yale students have worked there?

The Yale College Peer Networking Lists, maintained by OCS, can help answer these questions and so many more! 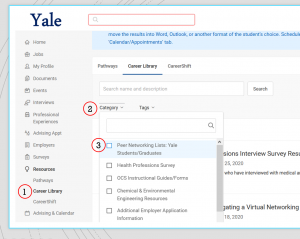 What are the The Peer Networking Lists? They are lists of Yale students and graduates who have agreed to share their postgraduate plans or summer experiences with the Yale community. These lists are in excel so you can easily filter by any of the criteria listed below.