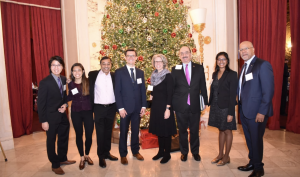 The affair provided the Yale graduate students a unique opportunity to discuss STEM at Yale and their own research with attendees at the uppermost echelons of industry, including Fiona Marshall, SVP, Research Science, Merck; Pete Coors, Chairman, Molson Coors; Mathai Mammen, Global Head of R&D, Johnson & Johnson. Matthew Ellis remarked, “the event provided a venue for networking among leaders of industry on a scale unlike any other event I have attended during my nearly six years as a Ph.D. student at Yale.”

The students also participated in a private meeting with NASA Chief Scientist James Green, and Associate Chief Tara Ruttley. Malena Rice, who is completing her Ph.D. studies in Astronomy, was excited to connect with scientists working directly in her field. Following the event, she joined Dr. Green as a featured guest on his weekly Ask-An-Astronomer show on Dec. 11th to discuss her work to search for Planet Nine. Yale leaders look forward to hosting NASA scientists Green and Ruttley in New Haven during a future campus visit. 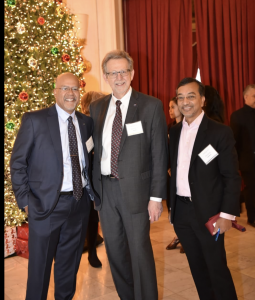 Shah Karim, Founder and CEO, SafeRock, and other  FYI Board members encourage fellow alumni to include Yale students and faculty in their own association and corporate events to bridge industry and Yale. Organizations interested in learning more about Yale talent and recruiting options may connect with the Yale Office of Career Strategy.

CME is a non-profit dedicated to accelerating diverse STEM talent and leadership for sustainable innovation in energy, materials, and life sciences. Led by STEM Program Producer George Rodriguez and CME Co-Chairs Ksenia Takhistova and Steve Barnett, CME convenes Nobel Laureates and the leaders of industry, government, academia, philanthropy, and the public to share insights through events and programs such as the CME STEM Leadership Awards and the CME NASA Symposia.